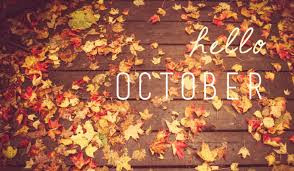 Word of the month: Awareness

October's had a reasonable start, all things considered. Monday (although technically still September) I took my car in to get the rear brakes done and it was spot on the quote I'd been given at the beginning of the month when I had my MOT done: £341.51. Fab.

A bit of adjustment with my budget and I paid for it in cash and this, all being well, takes care of car-related concerns until the insurance comes due in January.

I had some bloodwork on Thursday morning. Along with 'general' menopause-related complaints, my hair is thinning and I want to see if there is something that can, if not stop, at least slow and potentially reverse this. My hair has never in my life been those luxurious, frothy locks in shampoo ads. I've been 'blessed' with very fine hair, naturally wavy (until I lived in the Yukon, where it went more 'Laurie Partridge' than 'Roseanne Rosannadanna'), and, like everyone, lost hair generally over the years. It's only been in the last six months or so that I've noticed MORE hair than normal, and my scalp feeling more sensitive than normal (to hot water, cold, etc.) that I realised there was an issue. I've been taking some supplements which are intended to help but thought a visit to the doctor wouldn't be a bad thing anyway.

The results should be back in the next day or so, and depending on what is/isn't found we can have a follow-up to see if anything can be done. Is it thyroid-related, dietary, etc.? If it's genetic, there's little that can be done, and it's obviously connected to the hormonal chaos happening, but changing my diet certainly can't hurt either (removing caffeine, non-complex carbs, possibly dairy, sugar, etc.). There are some OTC products that can help and I'm trying hard not to obsess or get overly self-conscious about it, but it is a bit hard to come to terms with on some level because women's hair is so intrinsically connected to them on so many levels.

I am becoming aware that this is not uncommon. In fact, now that it's happening to me, I am becoming quite obsessed with looking at women's hair. From my desk above the high street, I look down on a lot of people during the day and can see that, actually, it's quite prevalent. Like that car you get that you've never noticed before, and suddenly everyone is driving one.

Hair works on three-month cycles, so it would take at least that long for any 'cure' to show results. But one step at a time.

Otherwise, work is work, and I won't bore you with all the excitement that happens there on a daily basis - you've heard it all before! 😝😜😜

The shop is going well, although yesterday someone walked out (unintentionally) without paying for cigarettes. I need to pay more attention. Anyway, hopefully that's the last time that happens to me!

My writing group met yesterday at a seafront cafe for our THIRD anniversary! It was absolutely lovely. We had a great meeting and discussed all the works that were presented, gorgeous food and, as always, wonderful company. I'm plugging away at my book and have made some forward progress in the past several days which pleases me, as I've been a bit stuck for a few weeks (again). I still need to go back and add some layers to the front so that characters and situations are more obvious and fleshed out, but at this point, I also think that moving forward is the way to go so that I can just get it finished and then start the first revision.

I'm off the week after next, a visit to my sister in Devon on the agenda. I'm really looking forward to it. Hopefully, there will be some good weather and we can get out and do a few things around the area while I'm there. I'll be leaving early Sunday morning and returning on Friday, after a visit to the market. I want a few hours at home before I have to work on Saturday.

It looks like the lad we thought was leaving, isn't, so I have my Sundays back, which isn't necessarily a bad thing. I have to remember that I do need time to rest and write and it might as well be Sunday!

Then there's Brexit (again. Still.). Hallowe'en deadline - appropriate, no? Latest (and first by BoJo) has been rejected, but of course, he's still convinced - he has to be, doesn't he? - that the EU will 'wave us happily good-bye on the 31st', with or without a deal. This has entirely consumed Parliament for three years, cost us millions (billions? Remember, we still have to pay a hefty 'divorce bill' of around £39bn regardless of whether we leave with a deal or not), and bulldozed over literally everything else that the country needs to worry about (jobs, housing, the environment, pensions, the NHS, etc., etc.). But here we are, the democratic process rolling along on square tires towards 'the end'...

Everyone's like, 'we'll be fine'. Perhaps, but how long will it take to recover? How will we be fine? What will people do? Banks? Insurance companies? Investments and real estate?How will travel be affected? Hospitality? Tourism? Goods and services being imported and exported? Farming? Manufacturing (what's left of it)? Fishing (what's left of it)? Security at the borders? The Irish border? Gibralter? Anyone?

I'm visualising the PM seeing himself as the proud captain at the helm of the newly launched 'Titanic'.

'Get ready for Brexit' is the rallying cry. But how? NO ONE KNOWS.

I'm just assuming it's going to be a surprise for everyone, including Parliament. There's so much in-fighting and quitting and intimidation and arguing and changing of parties happening it's ridiculous. Not that death threats and intimidation need to be added to the mix but apparently, MPs on both sides are getting them, and that's quite appalling, regardless of which side you sit on. I hope the perpetrators are caught.

Anyhow, onwards. It's all we can do, really. Most people are just sick and tired of hearing about it; apathy is high, although the Tories have lost their majority since the last bi-election and over the past few weeks when BoJo had a bit of a temper tantrum and fired a few of them. The Welsh elections lost him yet another seat, and I think there was a defector in the last couple of weeks, so they are now a minority government and it's unlikely that anything to do with Brexit will pass a vote. Anyone else seeing the iceberg yet?

Yet, still, no one has been able to answer my question of, 'What does Britain have to trade as a single market that the world will be lining up to get?'

Anyway, I am looking forward to my holiday in Devon. I've got a few things to take to my sister and picked up a couple more practical household items in the Sainsbury's discount section the other day, so they were good finds.

Hope you're all having a lovey weekend!
Posted by Northern Living Allowance at 10:59

Enjoy your visit with your sister. Sisters are the best.

Mom always had very fine hair and not a lot of it. She has "hair envy". Lol! I hope, your hair issue is just due to changing of the season. I lose hair every fall. Then it goes back to normal.

Aaarrrrgggg Brexit. I'm on the other side of the coin being in France but I'm just as mightily sick of it as you are. I can't even go ahead and request my residency because (a) if I do it now I'll get it automatically as an EU citizen and then have to change it anyway, and (b) most prefectures are not accepting our requests because no-one knows where the hell we stand. They say we will be able to apply for residency online if/when Brexit happens - but can you imagine which website will inevitably crash on the day!!!! And as for "menopausal hair", I also have fine, wavy hair but don't feel I lost much at menopause (I'm 61), but the bloody stuff went even more wavy and when it's humid I end up looking like Phyllis Diller!!! Still, rather that than developing a bald spot like some poor women I guess. Not sure that there is a solution though! Aah the joys!

I hope you enjoy your trip! It is always nice to get away from the routine for a little break.

Brexit seems to be a huge mess, and I think personally not a good idea for Britain etc. I think some of the people who voted for leaving were misled, and now everyone is just going to be hurt by the leave if they do leave. Politicians are so spineless and shameless.

As for hair, mine is pretty thick but my oldest sister had some thinning issues at the top, it most definitely leaves anyone feeling self conscious. Hopefully the treatments work - I have heard fish oil tablets can do wonders as well I believe!

I have always had fine, thin hair. I have had checked out and it's just the way it is. Nothing wrong except my genes. It's not fun, but I just try to have a hairstyle that doesn't call attention to it. Also, I have found as I have started to dye my grey hair, the dye makes my strands thicker and that helps. Good luck. You're right when you say that hair is important to women.

Hi Live & Learn - thank you for your comment! It's frustrating, isn't it? I coloured my hair several weeks ago and lost twice as much as when I wash it so am now afraid to do it again, although I've finally found a colour that works (and an all-natural product to boot). I'm using a caffeine shampoo/conditioner combo and that seems to be helping a bit. Adjusting my diet (reducing carbs & sugar) will as well, so time to start planning. We do what we can, don't we! xx

Hi T'Pol - sisters ARE the best! We had our moments like we always do, but overall it was a wonderful trip and an excellent break. My hair issue is more than just seasonal, it's a general thinning, but the caffeine shampoo/conditioner I bought seems to be helping a bit. Just need to pay attention to my diet I think! xx

Hi Treaders - I've stayed away from UK national news, but understand Parliament went ahead and defeated BoJo's deal anyway... O_o So frustrating on so many levels, and they just don't seem to understand the overreaching implications (really, who does??). I can't imagine the frustration/concern of all of you Brits in the EU - or the EU citizens here. You're all kind of nowhere at the moment, with no clarity in sight! As for my hair, I'm 5 years into menopause, so unsure why my hair has chosen this time to abandon me, but the blood test results did bring up issues around my kidneys (again), so that could quite possibly have something to do with it. I've got a follow-up appointment on 29th, so we'll go from there. xx

Hi JiCaLu - thank you, I had a great time! :D A rest is as good as a change, isn't that the saying? It's true (sometimes)!

Brexit is an utter fiasco or, as a German friend says far more accurately, 'a clusterf*ck'. Bingo. A total waste of time, particularly since he's apparently sent a letter - unsigned - to say that he's asking for a(nother) three-month extension, and has followed that with a second letter to effectively say 'just kidding. I'm not asking for an extension'. Or something...

I think the hair thing is definitely diet-related, so an adjustment there is required, but we'll see what the doctor suggests next week as well. xx