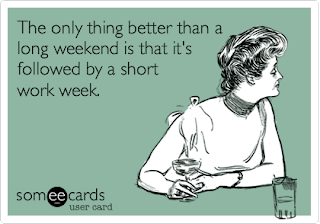 It's here at last! The long weekend. Aaaahhhh...An extra day to sleep in, an extra day to putter about the house and hopefully get some writing done, an extra day to recover from my part-time job. Ha ha! Holy cow - only five shifts in and I'm already wondering what I was thinking... it's not the till work, or the tidying (which I quite like), it's the rushing about and doing the physical work of refilling shelves, etc. It exhausts me. But the staff are great, and I have a feeling that I'm going to be in charge of closing the shop sooner rather than later. The colleague I'm now working with on Saturday nights isn't ... um ... capable (?) of taking on that responsibility, so apparently I'll be it. Great?

But, I'll deal with it as it comes. As is was, we were really busy last night so I was trying to get the evening tasks done while also helping with the customers. I forgot how physical retail can be. Despite having a list, it's quite challenging to make sure everything is done within time. Three bodies are infinitely better than two, but there we are.

Anyway. It's fine, just not something I can manage long term, I know that already, but I'll go through the holidays and review in the new year. As long as I have time to recover between shifts, it's generally not too bad. And the extra paycheques, when they finally arrive, will be most welcome!

Otherwise, it's been a pretty good two weeks, actually!

Treaders: before I forget, here is the link to the Nanaimo bar recipe I used (not quite like the real thing, but I don't think anyone will complain! Walnuts are optional):  https://www.elizabethskitchendiary.co.uk/nanaimo-bars-canadas-national-confection/.

I sent my sister a container of bars, too. It was her birthday yesterday so I included a card. She's left the place where she was staying (the landlady is a loony) and has moved into an AirBnB while she looks for something else. I'd like to say I have the funds to assist, but I don't and I said no more loans (unless it's for food) so she's on her own. She saw a little bungalow yesterday and is viewing a studio flat today.

I'm still waiting to hear from "my" thatcher, but I HAVE heard back from the genealogist, which I'm really pleased about! She said she'd be happy to answer some questions, so we're going for a drink one evening in September, once school hols are done and she's caught up on some of her work. So, hooray! This will give me some time to think of some questions to ask.

My Canada talk went well. I had a very loose plan which got even looser when some of the photos I was going to use didn't even show up, so I wound up spending a lot of time just talking about the Yukon and showing my own photos. It's not a place even most Canadians know about, so I'm happy to ramble on about it. The ladies seemed to enjoy it so that's the main thing.

I went online yesterday and bought a couple of dresses from a website I haven't used in AGES. I've been shopping second-hand for so long and am a bit over it right now. In April, I gave myself £100 for my birthday to buy some new clothes. I spent £60 so have been sitting on £40 since, not feeling motivated or interested in getting more stuff. I found these two items (one item heavily reduced) and thought, 'the heck with it!' They'll be arriving sometime next week (with free returns if they're not quite right, so that's good to know). I've already filled my virtual shopping basket with more items...*ahem*

One of the issues I've been fighting for several years is bloat. By the end of the day, I can be up to five pounds heavier than I was when I woke up and it's been frustrating and uncomfortable for several years. I know I'm always experimenting with food, but I decided to see what would happen if I didn't eat as much bread (I have "a bit" of a love affair with sourdough). I am happy (yet sad) to say that I have balanced the scale at more or less 10 1/2st for almost two weeks now (still marginally more than I'd like, but better!). My belly has shrunk considerably and I'm less grumpy because I'm feeling generally better. I just have to remember to keep drinking lots of water, which I'm terrible at.

So I can eat sourdough, just not as often as has been my habit. I've not bought store bread for a couple of years, and buy my sourdough from a proper bakery. All the same, it's a bit of a sad realisation that carbs are not my friends anymore. Particularly not those delicious sourdough ones. And do you know how hard it is to find good sourdough?!

I sat in the living room yesterday afternoon pondering what I can do with it. There's actually a reasonable amount of space to play with. I've got a lot of plants that I'm still trying to find the right places for, and they're currently in front of the living room windows which I'm not sure is exactly the right place. There's too much direct sunlight and they're getting sunburned and not at their best. At the same time, it's taken a couple of months for them to adjust so they're doing okay considering.

I'm going to take a cabinet out of my bedroom - hopefully leaving me more space - and put it in the living room to use as both a plant stand and storage. This does mean, though, that the bits and pieces that are in the cabinet need a new home. Hm.

Anyhow, it may or may not work like I hope it will, and may lead to me moving my room around again although I don't really want to do that. But there's so much potential, so who knows! 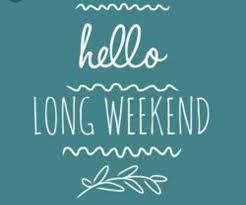 Have a lovely weekend, whatever you're doing!
Posted by Northern Living Allowance at 11:59

Thanks for the recipe. I'll have a go at it this week (although why I'm making all this sweet stuff when I live alone beats me). And yes retail can be exhausting can't it. As a kid I worked Saturdays and holidays at WH Smith and man was I busy. Although I do remember at "back to school" times having to put all the different pencils through the till individually - no scanning back then. Talk about mind-numbing!!

You know, sometimes my comments don't go through at all - they seem to get shot off into cyber space. Anyway thanks for the recipe. I just made them this morning as I have workers in replacing my heating system. Will let you know if they get the thumbs up - I'm sure they will!

I hear you! My flatmate isn't really a sweet tooth but did have one and quite liked it, but no one at work would eat any baking so there doesn't seem much point, although my neighbours might like it. Hm. I do enjoy it, but because - like you - I don't want to wind up eating it all by myself, I just haven't. I hope they're a hit!

Retail is pretty thankless, but I'm thankful the job is close, fairly straightforward and isn't going to be forever! I left full-time retail for a reason. Phew!

Your comments have always come through to me - I just don't always get to posting them right away. xx